I’d like to trace my career in the test and measurement industry and how my passion for Virtual Instrumentation merged with the vision of National Instruments.

20 years at Brüel & Kjær: Dream to reality of virtual instrumentation

When I started at Brüel & Kjær, one of the leading suppliers of Sound and Vibration test equipment, in 1973, it was in the technical writing department.  (My major in college was Math and Physics, not engineering).  My boss came into my office and showed me down the hall to the instrument room which stored all the demo equipment for tradeshows and courses.  In a month, I got a thorough  understanding of basic instrument and signal processing technology which has served me well in the transition into DSP, which is a core concept in Virtual Instrumentation.

I quickly learned that it was a company dedicated to excellence, demanding that product development  was driven by bright engineers, who were given the time, budget,  and freedom  to excel. Hewlett Packard, which in the 1970’s was the “pinnacle” of silicon valley in terms of quality, innovation, and excellence was the reference. When they invaded Brüel & Kjær’s sound and vibration market by creating a direct competitive division in Böeblingen, Germany, B & K counter-attacked, determined to beat the sh!t out of HP in the sound and vibration market, and ultimately succeeded.

I couldn’t keep my nose out of the engineering of the products, constantly asking the instrument engineers stupid questions.  Maybe this long-haired skinny kid was irritating, but I was invited to move to the product planning department.  I was frequently in Silicon Valley keeping up with the latest tech.  Getting appointments to visit all the cool companies like AMD, Motorola, Intel, TRW LSI, etc, was easy.  No NDA’s or irritating marketing types guarding the gates.  Just come over, and talk directly with the engineers.

Looking at the trajectory of technology development, DSP and user interfaces, around 1980 I became convinced that virtual instruments were the future. I had read in EE Times about a project “Redwood” at HP in 1980 talking about virtual instruments (but today have had a hard time finding references to it.) When the Apple Lisa was released in January 1983, I dashed down the hall to Mr. Kjær,  with a copy of the Business Week article in my hand, and he quickly signed off on the $10,000 purchase. We got an 1800 dollar fine for violating the US embargo rules for exporting it to Europe through our Boston office!

Within a few years I was leading a large engineering group developing virtual instruments, and participated regularly in test automation conferences, where Autotestcon was the pinnacle of “over the top” hospitality suites to wine and dine the military establishment. In 1985 two of our software engineers, Jes Sørensen and Per Bækgaard,  built a windowing environment on an HP 9845 to illustrate the Lisa inspired virtual instruments.

1987:  The VXI Revolution, and stepping stone to PXI

The modular system was a “pancake” architecture, with horizontal 1U rack mounted modules stacked on top of each other with integrated cooling channels and bus connections.

The early mockup in the rack to the left shows the 1U high modules with integrated cooling channels and bus connectivity.

With the announcement of the VXIbus Consortium, this “pancake” architecture was abandoned and Brüel & Kjær joined the VXIbus consortium in early 1988. 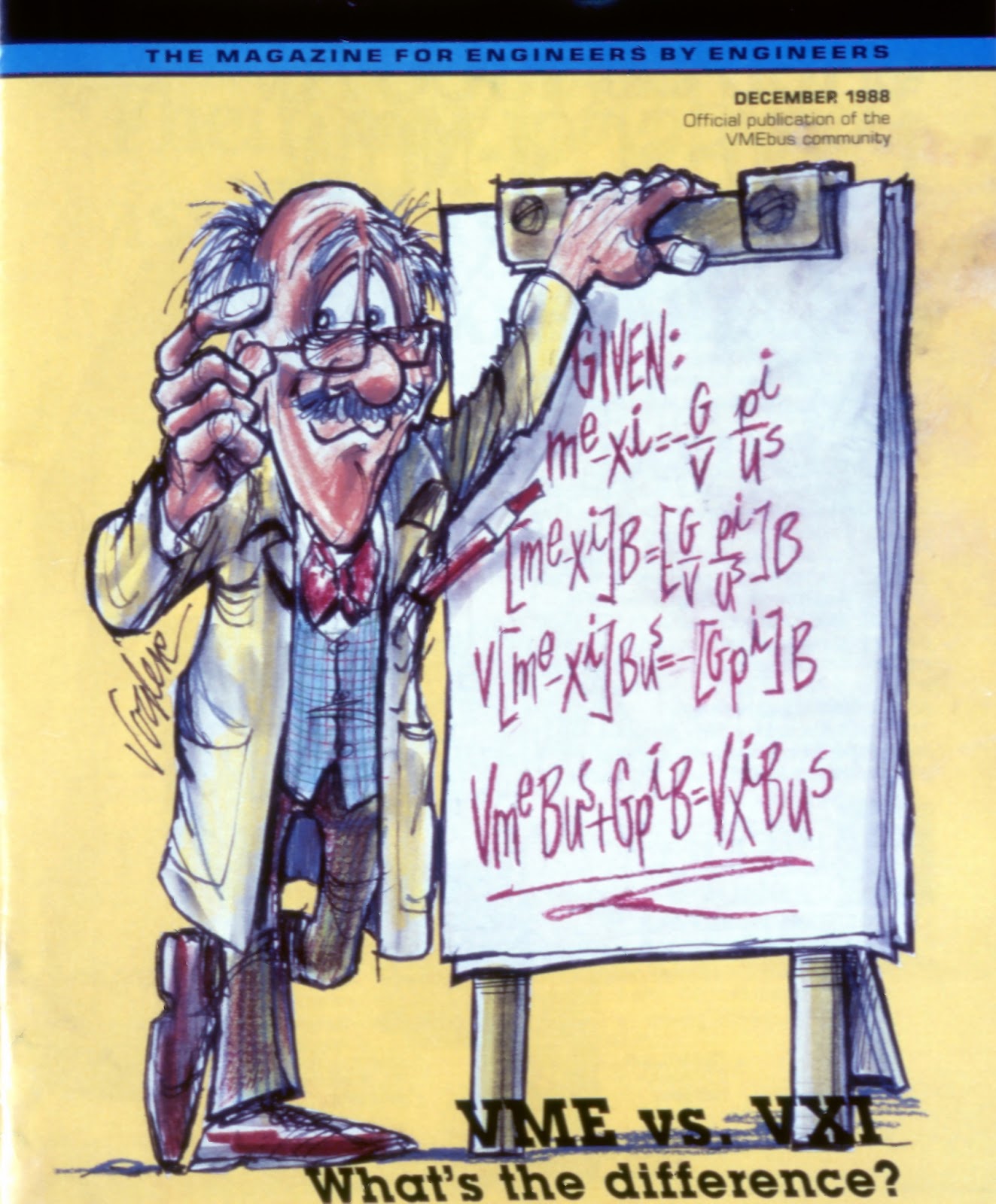 and I was in constant jetlag attending the monthly meetings and conventions where VXI Systems were showcased.

When the Modular Test System 3538 product line was announced by Brüel & Kjær at Autotestcon in Anaheim in 1991, Dr. T and Ron Wolfe came over and looked at the demos.  I’ve never seen them so quiet before or since.  But they probably planted the seed for a  brilliant counter attack mentioned in the VXIbus Newsletter published by Fred Bode.  “It’s too good to be true”.  How could a relatively unknown company in Denmark build stuff, with technology not yet common in the computer industry.

Did it really work? Was it all smoke and mirrors?  Fact was simply, it did work.  And had been tested to the company’s rigorous standards. The company had invested over 20 million dollars in this development.  The system ran embedded OS without rebooting for weeks on end, even as new device drivers were installed and tested while other users were making measurements.

Obvious also were the different approaches to Virtual Instrumentation.  The Brüel & Kjær “build-it-right-the-first-time” with a “cast of thousands and cost of minions”, vs. the agile National Instruments “ooch” approach.

The road to Austin

Back in Denmark, things were already going to hell. The fall of the Berlin Wall in 1989 resulted in a total loss of the extremely profitable 30% annual revenue from China and the Soviet Union. The historically profitable and solid Brüel & Kjær was in a downward spiral where the founders were thrown out by the bankers who took control, and all new major product lines outside the traditional product lines were sold off or axed.  B & K averted bankruptcy with only a few months to spare. Two thirds of all employees were fired.

When I joined NI in November of 1993, I had many plans to put discipline and process in the creative, but chaotic engineering organization.

But after walking around and listening to the engineers for a couple of months, I scrapped the plans, because they would have killed the creativity and drive. Instead I introduced formal bug tracking system using the bug arrival rate as a key metric for product release. As part of “ooching” the engineering groups  into a more disciplined approach, was creating these visible metrics, and let each group, based on these metrics, decide their own release criteria, and which development processes best suited their culture.

In my first months at NI, Dr. T was in my office with the wonderful Lake Austin view,

almost every day for an hour or two,  making sure that I, in depth, really understood NI’s technological foundation and philosophy, as well as the company’s core strategies and values.    His mind had a 10 GHz multi-core CPU that had to push data out through an RS-232 port.  He often spoke in parables, which I learned to translate for the rest of the organization.  Those afternoons were the equivalent of several Harvard MBAs.  As I reflect back on them, I saw values that I believe are timeless, still applicable today.  Not only his technology vision, but his human values, were remarkable.  Although he was a Republican party member, his values were far more humane and socially responsible than the hard-nosed management of the Democratic Michael Dell across the street.  Dr. T was brilliant, and hard driving, and I will always value those very special days.

In many ways, the dreams and visions of virtual instrumentation coalesced in 1997 with the creation of the open PXIbus standard.  Here the small form factor, combined with reasonable prices, incredibly high performance and scalability, became a tremendous commercial success.

When I was recruited to join NI I only signed a three year contract, since we felt that family-wise was where we belonged.  But it stretched to 5 plus years, and I finally  moved back to Denmark in 2000, to work for a high tech testing and consultant organization, DELTA and FORCE Technology.  Initially we had about 15 active LabVIEW programmers, but over the past 10 years, this has dwindled dramatically, and from my perspective, the NI transition to new strategies did not go well. The local, responsive, and highly competent sales and support offices were closed. These, with their unprecedented service and support were key differentiators for NI. The personal touch was gone for us as a  “small” customer with over just over 1000 employees. I recognize that this experience is not representative for the larger companies, who now receive a higher level of support and strategic access to NI resources.   Hopefully NI will be successful in rebuilding the “Portfolio” channel through distributors for the smaller customers, on whose shoulders the success of NI was built.

In 2019 I happened to be in Austin and decided to drop in on the Annual Shareholder meeting.  I discovered I had parked next to Dr. T as he worked on connecting his Tesla to the charger.  “They keep changing the user interface”, he noted as he poked around the monstrous touchscreen of the Tesla.  We walked into the building to which he no longer had a badge and sat together at the meeting.  I felt like a stranger.  Maybe he did too.

As we chatted, his enthusiasm was on his latest investments in Alzheimer research.  Back in the parking lot he gave me a copy of his illustrated book, “Memories from a Hill Country Garden”. He opened the book and quietly read a poem “The Sunset” that he had written honoring his late wife, Lee. I think we both shed a tear or two, as I also remembered my late wife, Kirsten.

I share these memoirs, because for me, NI was and is a very special company.  It spawned an enthusiastic workforce focused on making a difference through customer success.  It is my sincere hope that NI will continue to evolve and be successful in that mission.

In subsequent posts I will do a deep dive on my years in Austin.

One reply on “Convergence in Austin”

Thank you Carsten. Although we worked together for many years, I did not know some of your background so this was a fascinating read. I always valued you sage, considered and accurate advice and was gutted when you moved back to Denmark.